A Home Within AAJ

Trial spoke with LGBT Caucus Chair Amy Heins about the challenges LGBTQ attorneys face and how the Caucus and allies help fight discrimination.

Formation of the Caucus

Founding members Zachary Wool and Laura Yaeger scheduled an exploratory meeting to discuss forming the LGBT Caucus during AAJ’s 2014 Annual Convention. With enthusiastic support from AAJ leadership, the group started the process to become an official Caucus. At the 2016 Annual Convention membership meeting, the Caucus was unanimously approved. In 2019, the Caucus requested a bylaw amendment for representation on the AAJ Board of Governors and the AAJ Executive Committee, which passed unanimously.

The Caucus has grown to include nearly 1,500 AAJ members who self-identify as a member of the LGBTQ community or as an LGBTQ ally. All voting members are eligible to self-identify and enjoy the opportunities that the Caucus offers, from education to networking to public service. 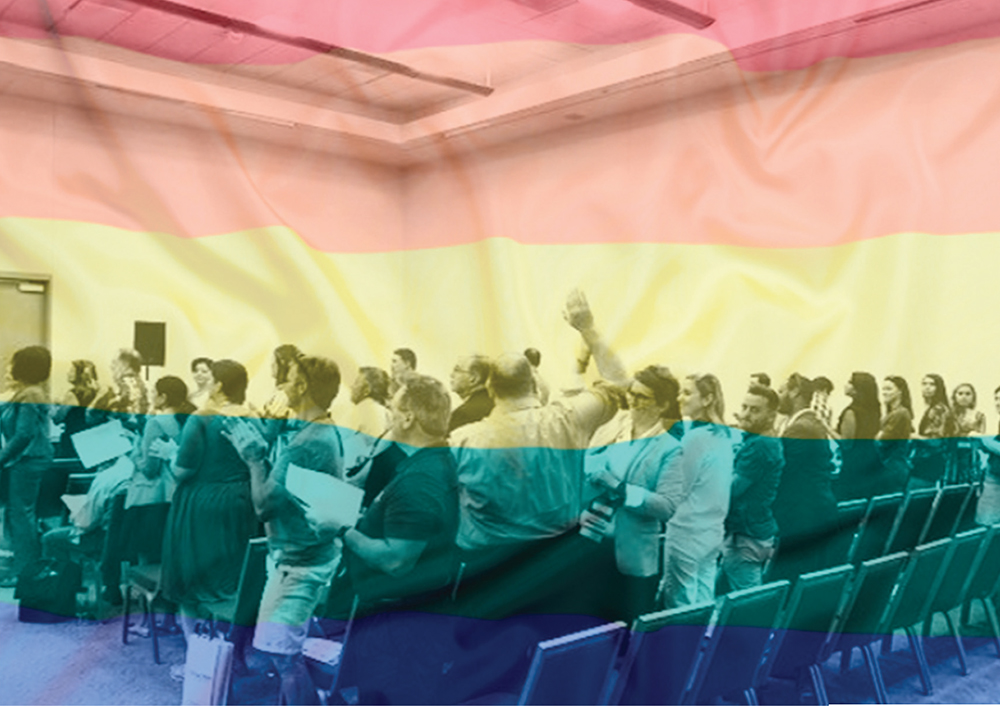 When the Caucus became official at the 2016 Annual Convention in Los Angeles.

Why was the creation of the Caucus monumental, and how has it helped LGBTQ trial lawyers?

LGBTQ attorneys have struggled to be recognized for so long. We are often invisible—sometimes by choice, sometimes by circumstance. Our issues are often combined with other groups under “inclusiveness” but never specifically addressed. But many of the challenges members of the LGBTQ community face are specific to us. And our issues are not homogenous—a transgender person faces different challenges and forms of discrimination than a bisexual person. Having a voice that is specific to us and specifically from us is crucial.

Everyone needs a home. Everyone needs to be seen. Everyone needs to know that they are part of a community; that they have a voice, and that they will be heard. The day the Caucus was approved and announced was a loud public declaration that AAJ recognizes and sees its LGBTQ members, that it has the same hopes and expectations for us as for any other Caucus, and above all, that we have a home.

What are some unique challenges LGBTQ attorneys face?

The challenges are myriad, of course, but first, we need increased visibility. We need “out” LGBTQ attorneys doing the work so that LGBTQ students thinking of entering the legal profession see a community for themselves. They need to see people who are the same as them advocating in trials, running law firms, and doing the things that they would like to do but may be afraid to.

Another challenge is the daily decision we make about how “out” we feel safe being in any given situation and how we handle microaggressions and more overt discrimination. It’s a very personal calculus we go through every time we meet someone: Is this a person I can trust? Can I talk about my partner here? And when we’re representing a client, we sometimes think, “Is this judge treating my client differently because I ‘look gay’? Opposing counsel is misgendering me, but is this the right time to fight that battle when my job at this moment is to represent my client? Is this a safe space for me and my client?”

Within the LGBT Caucus, there is absolute acceptance of who our members are and absolute trust of others in the group. We can have these conversations with each other and know that the person has been there and is going to “get it.”

What does it mean to be an LGBTQ ally, and what does that look like in the trial lawyer community?

Being an ally is more than just donating money, or attending Pride parades, or just not actively engaging in discriminatory practices. Those are all crucial, but it’s harder work to recognize and call out the microaggressions, low-key slurs, and everyday choices that negatively impact LGBTQ people. We need allies to do that daily and to hold their peers accountable, because we can’t do all the work ourselves.

The allies we have within AAJ do a wonderful job in that regard, and I would like to see them spread those skills out to their friends, families, and co-workers. They could encourage those people to start doing things such as including LGBTQ people in their diversity and inclusion hiring goals and taking on LGBTQ clients. Be present and active in fighting discrimination—that is what being an ally boils down to.

Where do you find inspiration as an LGBTQ leader?

I look to people who I know personally for inspiration. Within AAJ, Laura Yaeger and Shenoa Payne have been guiding lights to me. I respect them immensely—their advocacy skills are top notch, and their commitment to LGBTQ issues across the board is complete. And the Caucus would not exist without Zachary Wool and Laura, who understand the need for a community. Shenoa was the chair last year and came in with a vision. It’s an honor to follow in their footsteps.

I also look up to local South Carolina attorney Colleen Condon. She runs a family law practice geared toward LGBTQ rights. She and her wife were the first same-sex couple to be given a marriage license in South Carolina. Nobody thought it would happen in such a red state, but she made it happen! She’s a force in local politics and a leader in our community, not to mention one of the funniest people I’ve ever met.

What’s the best piece of advice you’ve gotten during your time with the Caucus?

Dive in and don’t be afraid to ask for help or clarification when you need it.

What are some important considerations when representing LGBTQ clients?

Make your office and firm as welcoming to all people as possible. Don’t assume someone is LGBTQ; let them tell you if they so choose. Use gender-neutral language in your documentation. Use neutral language when talking to your clients–for example, ask “are you in a relationship” instead of “do you have a boyfriend.” If clients indicate they have preferred pronouns, then use those pronouns and have your staff use them. Make sure the correct pronouns are being used even when talking about the case internally, because gender doesn’t change when the person leaves the room.

Have cultural competency training available for your office and require everyone to attend. Be respectful of the LGBTQ family unit in all its forms. And always, call out discrimination and bias when you hear it and see it. Make it known that you will not stand for that.

What is a goal you had for the Caucus this year?

Last year, we began working to create a scholarship with the goal of increasing LGBTQ attorney membership within AAJ. I was very proud to announce at the 2022 Winter Convention that we far exceeded our initial funding goal, which is fantastic.

What is one of your favorite Caucus memories?

I don’t think anything can beat the day it was announced at the 2016 Annual Convention in Los Angeles that we were officially a Caucus. Everyone stood up and cheered. It was an emotional, wonderful, and incredible moment.

Amy Heins is an attorney with Shelly Leeke Law Firm in Charleston, S.C., and is the 2021–2022 chair of the LGBT Caucus. She can be reached at aheins@leekelaw.com.

Last year, the LGBT Caucus created a scholarship that will be awarded to an attorney in practice less than five years who identifies as a member of the LGBTQ community. Funded for the next 10 years, the Wool Yaeger Cabraser LGBT Trial Lawyer Scholarship will be awarded annually, providing the recipient with registration to the AAJ Annual Convention, as well as a generous travel stipend. Endowed by the creators of the Caucus, Zachary Wool and Laura Yaeger, along with renowned trial attorney Elizabeth Cabraser, the scholarship seeks to advance the mission of the Caucus: to recruit and retain more AAJ members who identify as LGBTQ, to grow the Caucus, and to assist those who would not otherwise financially be able to attend Convention. Applications opened in April, and the recipient will be announced this month.

Immediate Past Chair & Representative to the AAJ Board of Governors:
Shenoa Payne | Portland, OR