Forced Arbitration and Big Banks: When Consumers Pay to Be Ripped Off

When Seeking Justice Against a Bank is Worse than Gambling

Over the last five years (2017-2021), 104 Americans attempting to bring forced arbitration cases against banks found themselves having to pay money to the bank, despite the fact they, the consumer, initiated the case. Those 104 Americans ended up paying an average of approximately $24,000 each.

Discover was not the first bank to profit so well from forced arbitration. Between 2009 and 2016, Wells Fargo opened 3.5 million bogus bank and credit card accounts in its customers’ names. Many of these customers found themselves incurring fees on accounts they never knew they had, saw checks bounce and overdraft fees pile up, and had their credit scores tailspin. When the bank’s scam was discovered, those customers found themselves unable to take the corporation to court because of forced arbitration agreements in their original, legitimate accounts.2

According to an analysis by the Economic Policy Institute, only 250 customers pursued forced arbitration against Wells Fargo in the wake of the scandal. Shockingly, those Wells Fargo customers were ordered to pay the bank nearly $11,000 in compensation.3 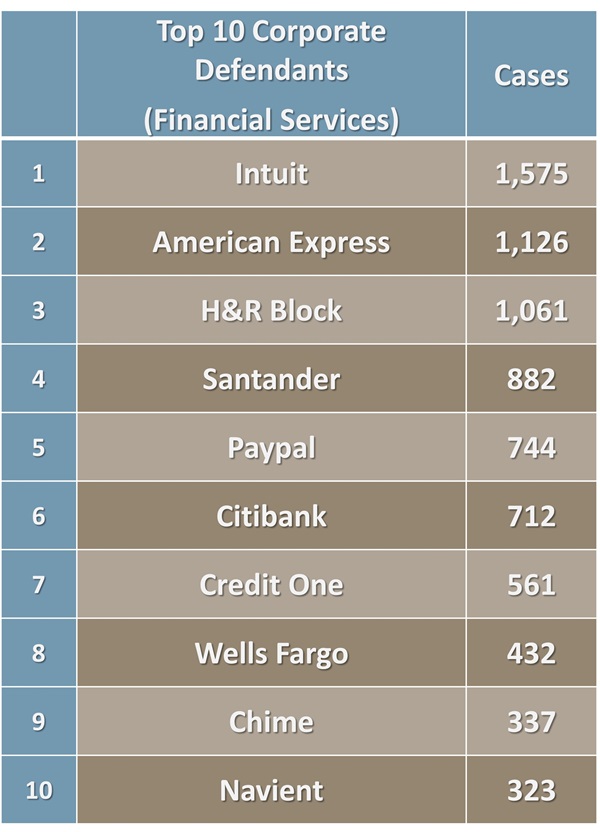 Putting aside the risk of having to pay the bank money, Americans were exceptionally unlikely to win their cases. Just 237 consumers and employees won monetary awards in forced arbitration against banks and other financial institutions at AAA during the five years from 2017 to 2021, making for a win rate of just 1.8%. That makes the likelihood of winning a forced arbitration claim against a bank less than half the win rate against corporations from all sectors, which was already a pitiful 4.8%.

The 1.8% win rate against financial services corporations is one of the worst in forced arbitration. Of the top sectors, only retail, restaurant, healthcare, and transport—categories that are dominated by employee claims—had worse win rates. In sectors made up of predominantly consumer claims, no win rate was worse than financial services, not even complaints against cable companies.4

In the employee space, just three corporations—Citibank, Corelogic, and JPMorgan Chase—accounted for 38% of all employee forced arbitrations over the five-year period. Only two employees from any of the three corporations won compensation in their claim, making for a 0.5% win rate.

Consumers brought $2.8 billion worth of claims against banks and financial services corporations over the last five years but were awarded only 0.5% of that (approximately $14 million). By comparison, the 10 banks and financial firms using forced arbitration most frequently took in $1.7 trillion in revenues over the same five years.

Meanwhile, AAA itself reaped over $13 million in fees for bank-related cases over the five years. 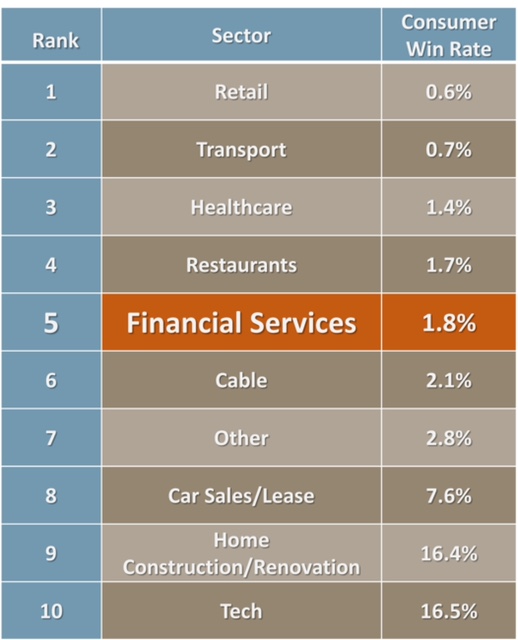 Banks and the “Repeat Player” Phenomenon

The repeat player effect certainly has an impact in the financial sector. The consumer/employee win rate against financial services corporations with 10 or more prior forced arbitrations was just 1.1%—less than half the overall 2.8% win rate.

Again, Discover led many of its fellow banks. AAA’s records show that Discover appeared before AAA arbitrators at least 757 times, though the true number is most certainly higher due to variations in Discover’s title in the AAA database. Not only was Discover a repeat player, but the bank managed to get claims in front of repeat arbitrators—arbitrators Discover had used at least once before—in 38% of the claims against it.

Even Discover did not claim the title of #1 repeat player. AAA data shows Intuit—maker of TurboTax—had historically appeared before AAA arbitrators a whopping 39,000 times, nearly twice the number of any other corporation (second was Amazon, with 24,000 prior arbitrations).

Unfortunately, banks and financial services companies have gone beyond using forced arbitration as a Get-Out-of-Jail-Free card.