Where White Men Rule: How the Secretive System of Forced Arbitration Hurts Women and Minorities

In 2018, musician Jay-Z found himself in a legal dispute with the clothing company Iconix. Unable to reach a resolution, the parties took their dispute to arbitration with the American Arbitration Association (AAA), where it hit an unusual stumbling block. When given a roster of arbitrators to choose from, Jay-Z’s legal team realized there was not a single Black arbitrator among them.1

When the legal team pointed out that Jay-Z was Black and asked for “neutrals of color,” AAA responded by suggesting a further slate of six arbitrators who were minorities. However, only three of those were Black, one of whom was a partner at the law firm representing Iconix in the underlying arbitration.

The case shone a light on the normally shadowy world of arbitration. While federal and state judiciaries have struggled for years with the lack of representation within their ranks, they are positively diverse compared to arbitration.

Arbitrators in consumer and employment cases are mostly male and overwhelmingly white. At AAA and JAMS, the two largest consumer and employment arbitration providers in the country, 88% of arbitrators are white and 77% are male.2 And that’s as diverse as it gets. In 2019, members of the National Academy of Arbitrators determined that over the organization’s 72-yearhistory only 35 Black, Indigenous, and people of color (BIPOC) had been admitted, just 2% of the overall membership.3

To put this into perspective, individuals who identify as BIPOC make up nearly 40%, and women make up 51%, of people living in the United States.4 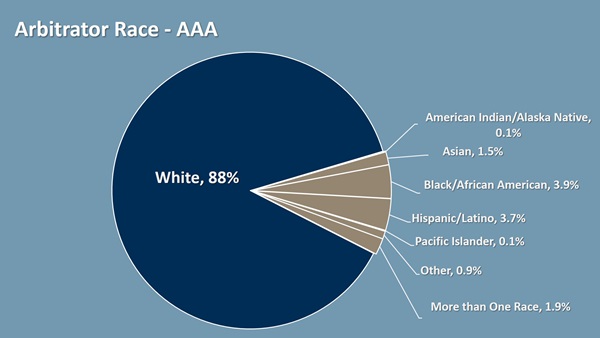 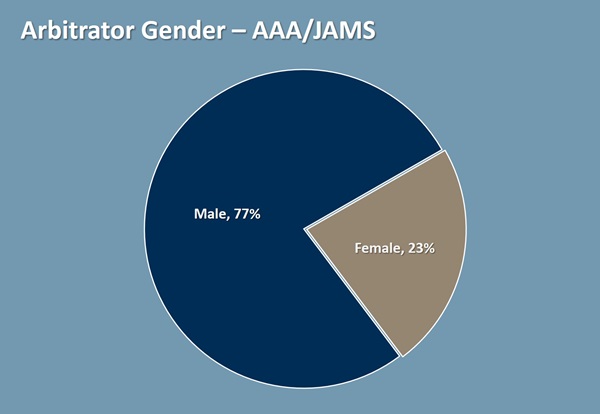 Few people realize that forced arbitration provisions eliminate their constitutional right to a trial before a jury of their peers.5  But for minorities and women, forced arbitration not only eliminates the jury but also all but ensures their case will be decided by a white male. A consumer is more likely to be struck by lightning than win a monetary award in forced arbitration as it is; being Black or female reduces their prospects even further.6  Take for example a recent Tesla case, in which a Black employee detailed suffering at least a dozen instances of racial slurs and threats, including video of coworkers threatening him while using the n-word. Though Tesla CEO Elon Musk apologized to the employee, agreed changes needed to be made, and offered to settle the case, Tesla eventually took the case to arbitration, where a white arbitrator ruled that the slurs weren’t racist and were more “consistent with lyrics and images commonly found in rap songs.”7

Women and Minorities are Most Affected by Forced Arbitration

The lack of diversity in arbitration is a problem made worse by the fact that women and minorities are more likely to be subject to forced arbitration than men or white, non-Hispanic workers. 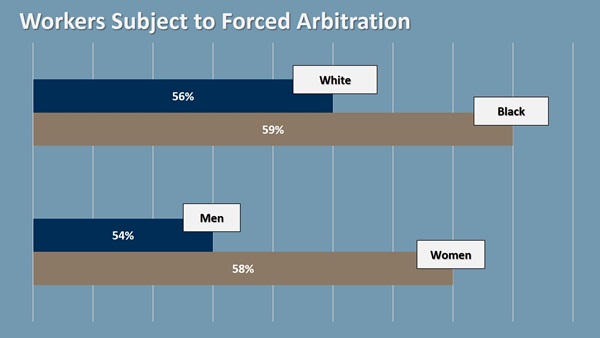 Income is also a factor. Lower-paid workers are more likely to be subject to forced arbitration than more highly-compensated employees. Minorities and women are not only more likely to work in fields that render them subject to forced arbitration but also tend to earn less overall. Black men earn an average of 87 cents for $1 earned by white men.10  Women receive even less, earning 82 cents for every $1 earned by men.11

The result is that minorities and women are disproportionately forced into a dispute resolution system that is decidedly not of their peers.12 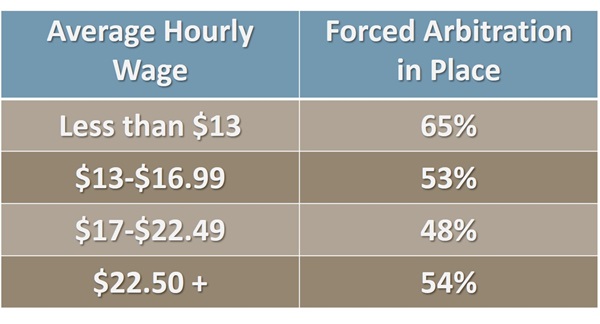 The gender disparity within the arbitration world is of particular concern when it comes to sexual harassment claims and other employment issues. The various scandals that resulted in the development of the #MeToo movement highlighted how corporations had been using forced arbitration—in which the arbitrators are almost always male—to silence women who had been sexually harassed. Forced arbitration does this not only through its secretive nature but by including class waivers, which stop group actions that would be the equivalent of class actions. Women who are exposed to patterns of sexual harassment are on their own and cannot come together to challenge workplace disputes. Individual cases are settled confidentially, leaving the perpetrators free to continue the same behavior.

In testimony at a February 2021 hearing on forced arbitration before the U.S. House Judiciary Subcommittee on Antitrust, Commercial and Administrative Law, former Fox News anchor Gretchen Carlson highlighted how her employer had tried to use a forced arbitration clause to silence her after she was fired for reporting sexual harassment by her then-boss, Roger Ailes. By refusing to be quiet, Carlson helped prompt other women to come forward with allegations against other media figures, including Bill O’Reilly, Charlie Rose, Les Moonves, and others.13

If arbitration is ever to be a credible means for justice, it cannot, as it is currently, be a tool to silence victims of workplace harassment and discrimination. In employment cases resolved by AAA between 2016 and 2020, the top 10 most frequently-used male arbitrators—all of whom are white—awarded monetary damages to employees in just 2.1% of cases (JAMS does not reveal arbitrator names). Female arbitrators, on the other hand, awarded monetary damages 3.4% of the time. Female arbitrators also tended to award higher damages than their male counterparts.14

Lack of Diversity in Age and Sexual Orientation

The lack of diversity within arbitrator ranks shows up in other areas too.

At AAA, 2% of arbitrators identified as non-heterosexual, while in the U.S. as a whole, 6% of Americans identify as LGBTQ (sexual orientation was also the demographic question AAA’s arbitrators were least likely to answer, with more than half of all arbitrators refusing to disclose).15

The age of arbitrators also skews far older than the population as a whole, in part because arbitrators tend to become arbitrators only after long careers in the legal profession. Neither AAA nor JAMS reveal arbitrator ages, but another arbitration provider—the Financial Industry Regulatory Authority (FINRA), the private corporation that handles arbitration cases arising out of brokerage disputes—does. While it suffers from an almost duplicate lack of diversity with regard to gender and race (7 out of 10 FINRA arbitrators are male and 8 out of 10 are white), its arbitrators skew mature—75% are aged 60 or older, and 44% are 70 or older.16  Such homogeneousness is the reason the arbitration world is so often described as “pale, male, and stale.”

Minority and Female Arbitrators are Frozen Out

Minority arbitrators also face a Catch-22: how can they develop a career as an arbitrator if the parties will not select them? Corporate defendants are known to strike minority arbitrators when given a panel of potential candidates. Smith v. American Arbitration Association evolved from an arbitration in which a female claimant, Lisa Smith, found herself presented with a list of 15 potential arbitrators to oversee her dispute. Fourteen of the proposed arbitrators were men, and the lone female, whom Smith had listed as her first choice, was immediately struck by the defendant corporation, rendering the “diverse” panel moot (the United States Court of Appeals for the Seventh Circuit saw no problem with the arrangement and ruled in favor of AAA and its corporate client).18

In another instance, a female arbitrator, who held both an active legal practice and a master’s degree in dispute resolution, was passed over by AAA, while her white husband, with no legal practice or arbitration experience, was invited to join AAA. The reason given? The female arbitrator wasn’t expected to generate enough business. When she complained, that arbitrator was also told that AAA’s construction arbitration panel, “stopped putting Blacks on the panel because no one hires them.”19

Trust in the civil justice system is enhanced when the public sees that the judges deciding their cases reflect the diverse racial, ethnic, and cultural background of American society. As such, there have been, and continue to be, significant efforts to increase diversity in the federal judiciary. But the arbitration world is far behind even the judiciary. As Texas A&M University School of Law professor Michael Z. Green wrote, “the lack of diversity in the arbitrator pool may cause black employees to not pursue their discrimination claims out of a feeling that it would be futile in such a questionable system.”20

Federal and state courts face similar issues with regard to diversity but there is one major difference in arbitration. In the courts, whatever the race of the judge, a plaintiff can still face a jury. In arbitration, the arbitrator is judge and jury. And the process of selecting an arbitrator undergoes far less scrutiny than the same process for selecting a jury. Instead, forced arbitration is dominated by a small number of judges, retired judges, and corporate lawyers who have carved out a niche for themselves aiding businesses in avoiding civil jury trials, EEOC proceedings, and any other potentially public forum of justice.