Intuit and H&R Block Scammed Taxpayers. Now They're Trying To Scam The Courts.

Intuit, the parent company of TurboTax and H&R Block offered free tax filing programs for over a decade as part of the IRS Free File program.  In return for offering taxpayers a free option, the IRS agreed not to create its own free tax-filing software—as many countries have. The companies advertised the free options heavily. To this day, TurboTax advertisements frequently conclude with the line, “That’s right, TurboTax Free is free. Free, free, free, free.”1  Internally, however, the companies sought to monetize, or outright hide, the free options. A ProPublica investigation revealed that TurboTax actively hid its free version from search engines.2  Even when taxpayers found the free version, they would have to spend hours filling in their information only to be told after the fact that they did not qualify and would have to use paid versions.3

In company documents, H&R Block stated, “while we are expanding our free offering, there are still opportunities to monetize within the free product… through selling additional services within the product flow as well as from filers graduating to more complex returns and/or products when they return.”4

Intuit likewise planned to “[t]ake share in FREE market, then monetize.”5  Their efforts paid off: roughly one-third of “free” customers at Intuit and H&R Block eventually upgraded to a paid version.6

A 2020 Treasury Department audit found that 14 million Americans may have been duped into using paid tax software when they could have used free versions.7  That would equate to approximately a billion dollars in revenue for the tax preparation industry.8

Forcing Taxpayers Into, and Out of, Forced Arbitration

Forced arbitration is a rigged system designed by corporations in which injured workers and consumers have no meaningful chance of finding justice. Forced arbitration requires Americans to “agree” to surrender fundamental constitutional rights—often without ever realizing they’ve done so. When corporations harm workers and consumers by cheating, stealing, or even breaking the law, cases that should be heard by a judge or jury are instead funneled into a secret system controlled by the wrongdoers in which there is no right to go to court, no right to a jury, no right to a written record, no right to discovery, no transparency, no legal precedents to follow, no opportunity for group actions when it would be too difficult or costly to file a claim alone, no guarantee of an adjudicator with legal expertise, and no meaningful judicial review. Without such checks and balances, the deck is stacked heavily against workers, patients, and consumers, and systemic misconduct is allowed to continue in secret.

Eliminating group actions—such as class actions—is a major selling point for corporations using forced arbitration. Class actions can bring together multiple cases that allege widespread misconduct—such as fraud, breach of contract, price-fixing, and the bait-and-switch tactics used by Intuit and H&R Block—but which are financially unfeasible to file on an individual basis. The possibility of facing a class action also deters such misconduct in the first place, whereas forced arbitration eliminates the majority of cases, hides the nature of misconduct, and gives corporations carte blanche to take advantage of consumers in the future.

The Intuit and H&R Block example follows other “mass arbitrations” against the likes of Amazon, Doordash, and Family Dollar, in which hundreds or even thousands of outraged consumers have sought accountability through any means available to them. Faced with a shoe most definitely on the other foot, these corporations have often appealed to the courts they sought to bypass. As U.S. District Judge William Alsup stated when refusing DoorDash’s attempt to escape its own forced arbitration clause and go back to a class action, “This hypocrisy will not be blessed.”11

The sheer number of cases filed against Intuit and H&R Block caused forced arbitrations involving consumers to soar by more than 50% over the previous year to a new record high, according to an analysis of closed claims at the nation’s two largest forced arbitration providers—the American Arbitration Association (AAA) and JAMS. 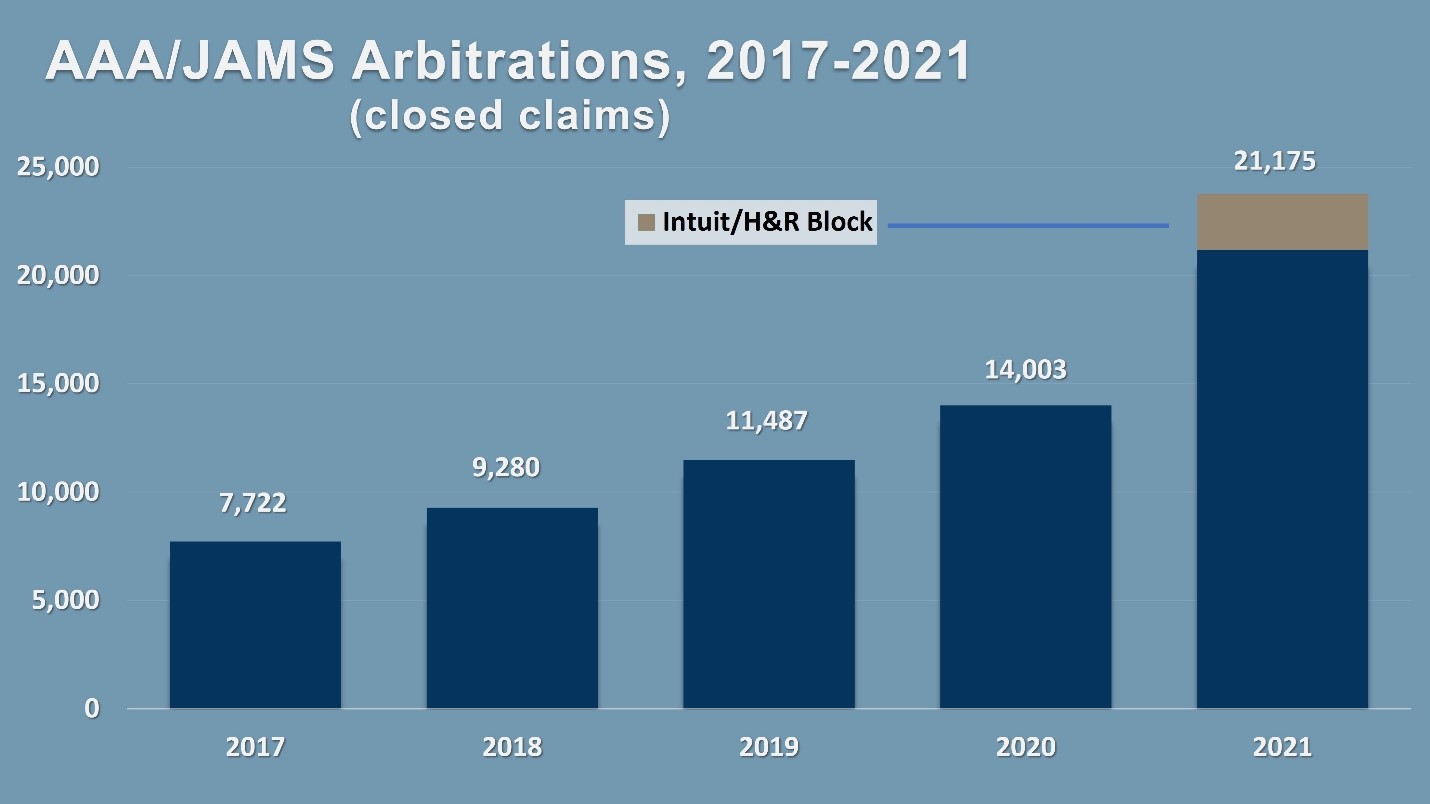 In 2021, 17% of all consumer forced arbitration cases were filed against Intuit and H&R Block. And it appears this may be just the tip of the iceberg. Corporations that thought forced arbitration was an effective way to eliminate claims have not appreciated consumers and employees turning the tables against them, putting corporations in the ironic position of trying to undermine the very system they themselves set up.

Copyright © 2022 American Association for Justice®. Reproduction of any kind is prohibited.