Forced Arbitration in a Pandemic: Corporations Double Down 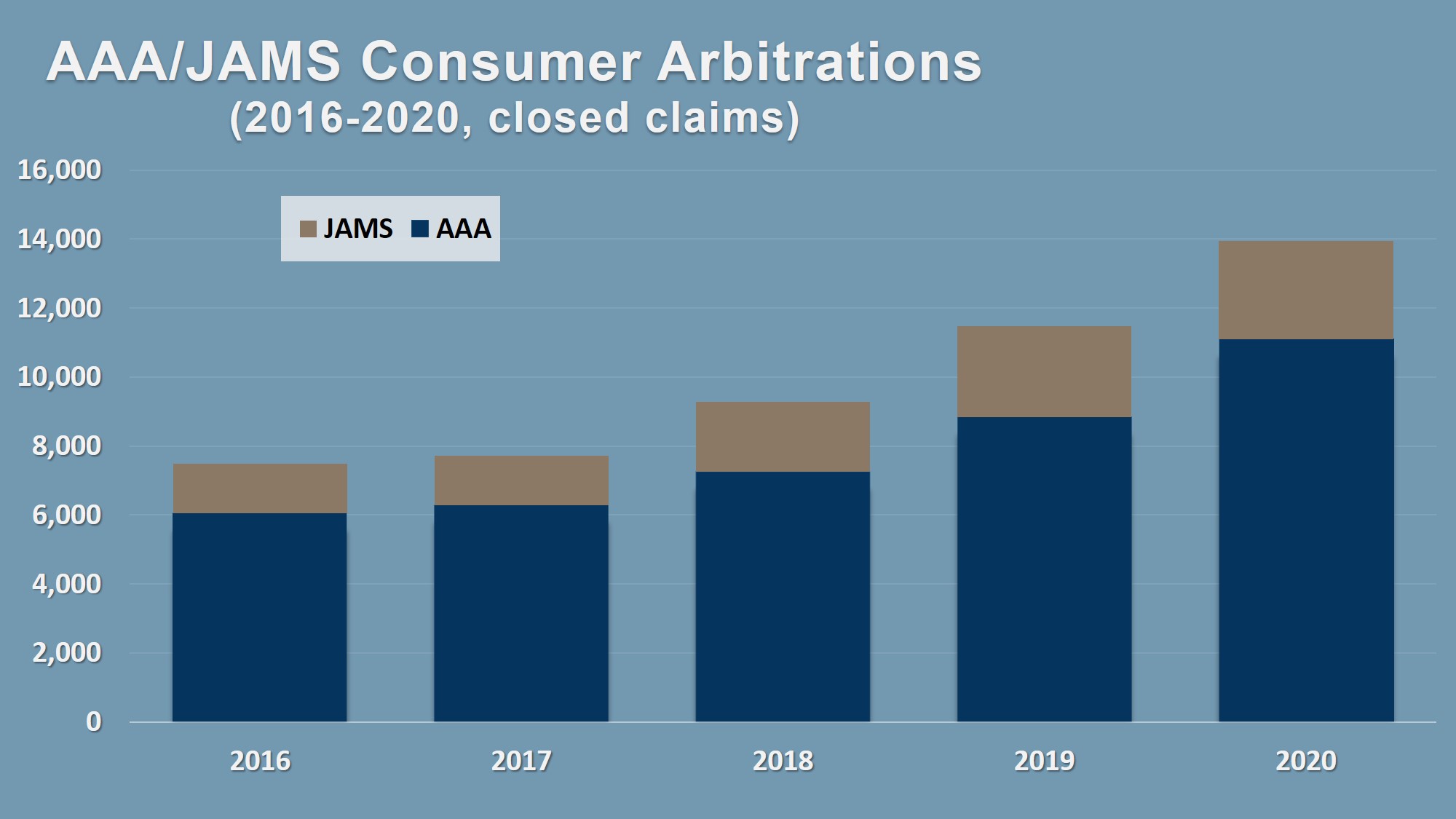 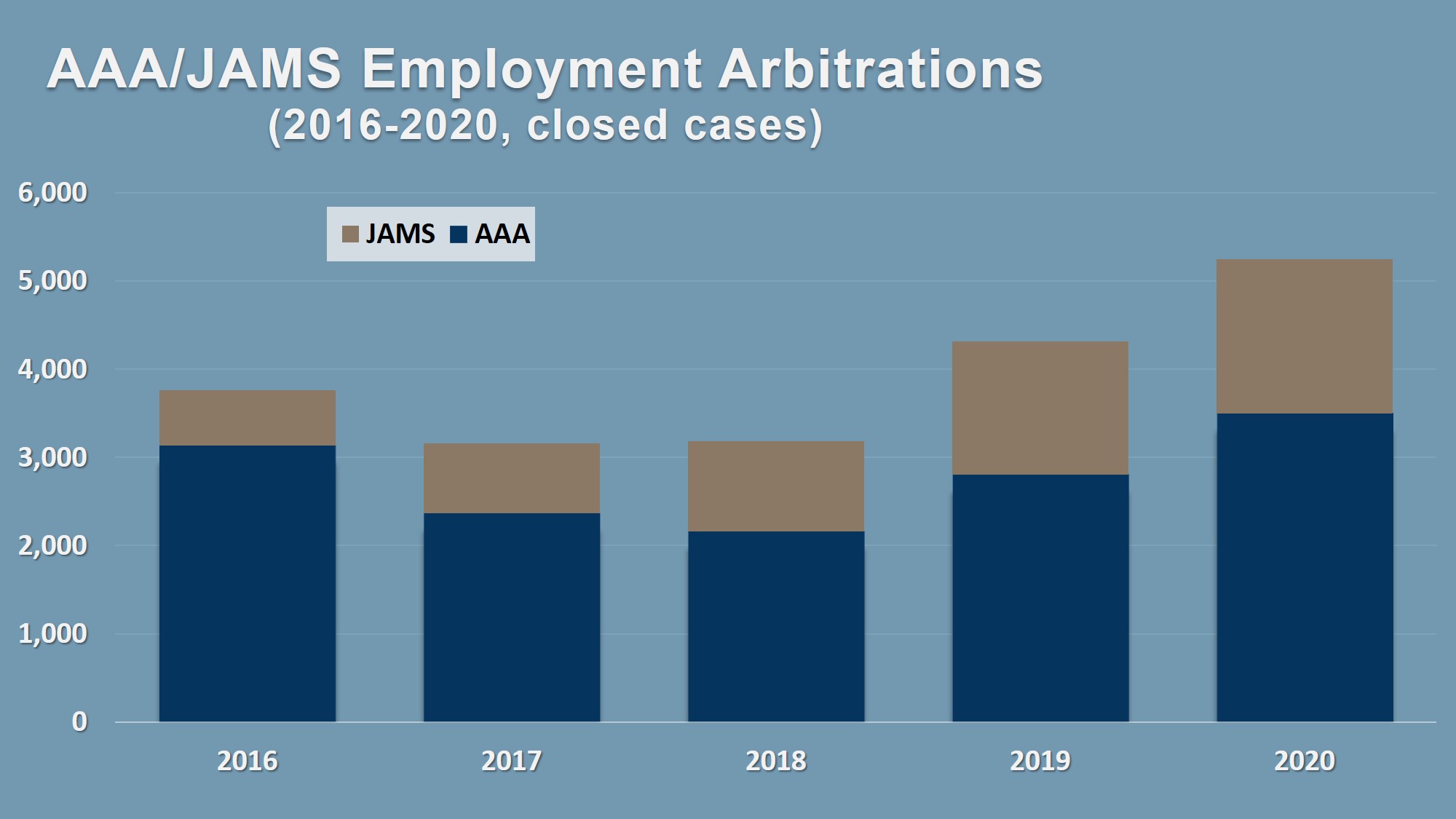 Unlike federal and state courts, forced arbitration providers do not provide data on how many cases are filed each year, just how many are closed. Nevertheless, year-over-year comparisons of closed case filing rates showed a 17% jump in new cases closed in 2020 over 2019.

What hasn't changed is the likelihood of success. In years past, consumers were more likely to be struck by lightning than win a monetary award in forced arbitration.1 In 2020, that win rate dropped even further. Just 577 Americans won a monetary award in forced arbitration in 2020, a win rate of 4.1%--below the five-year-average win rate of 5.3%. More people climb Mount Everest in a year (and they have a better success rate) than win their consumer arbitration case.2 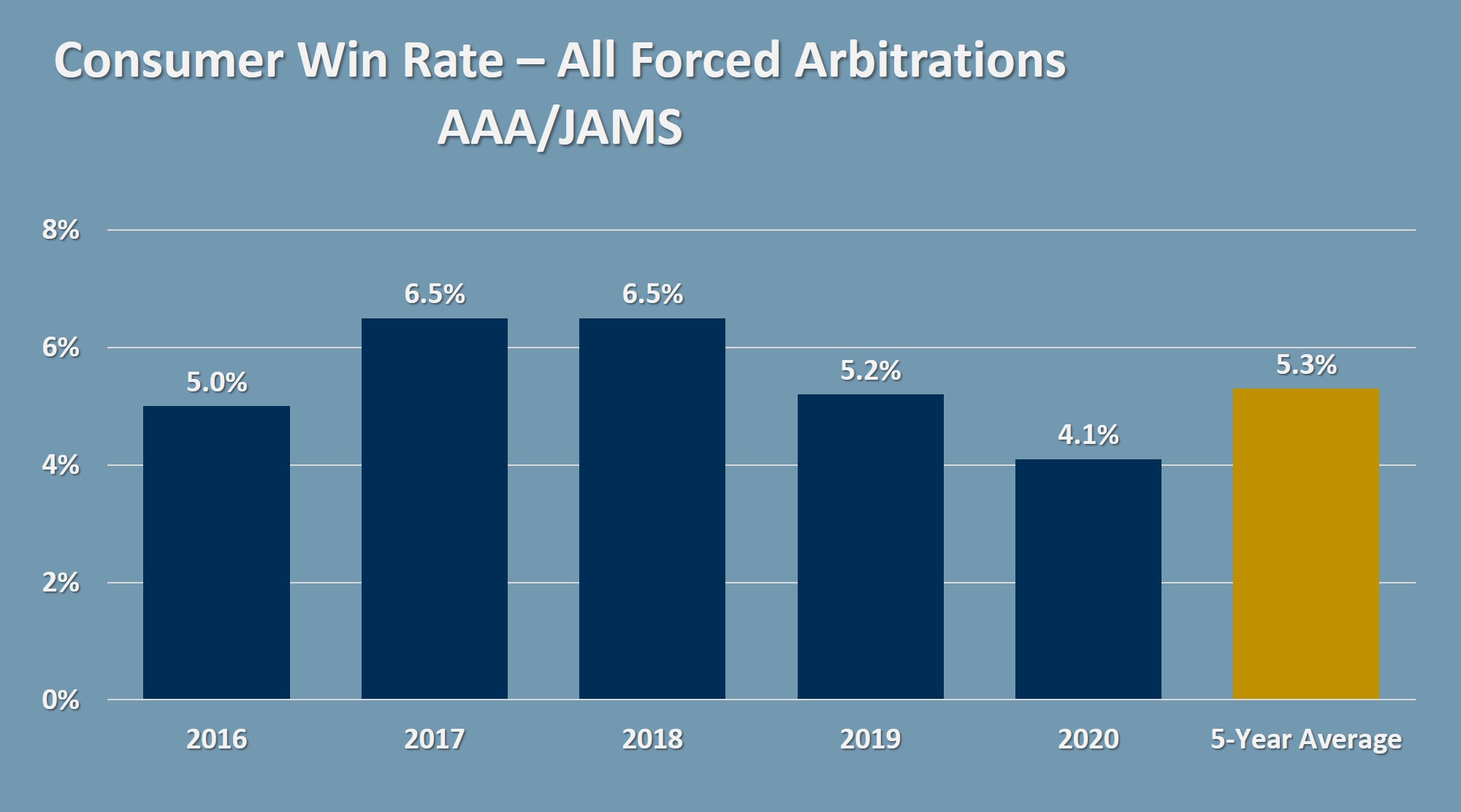 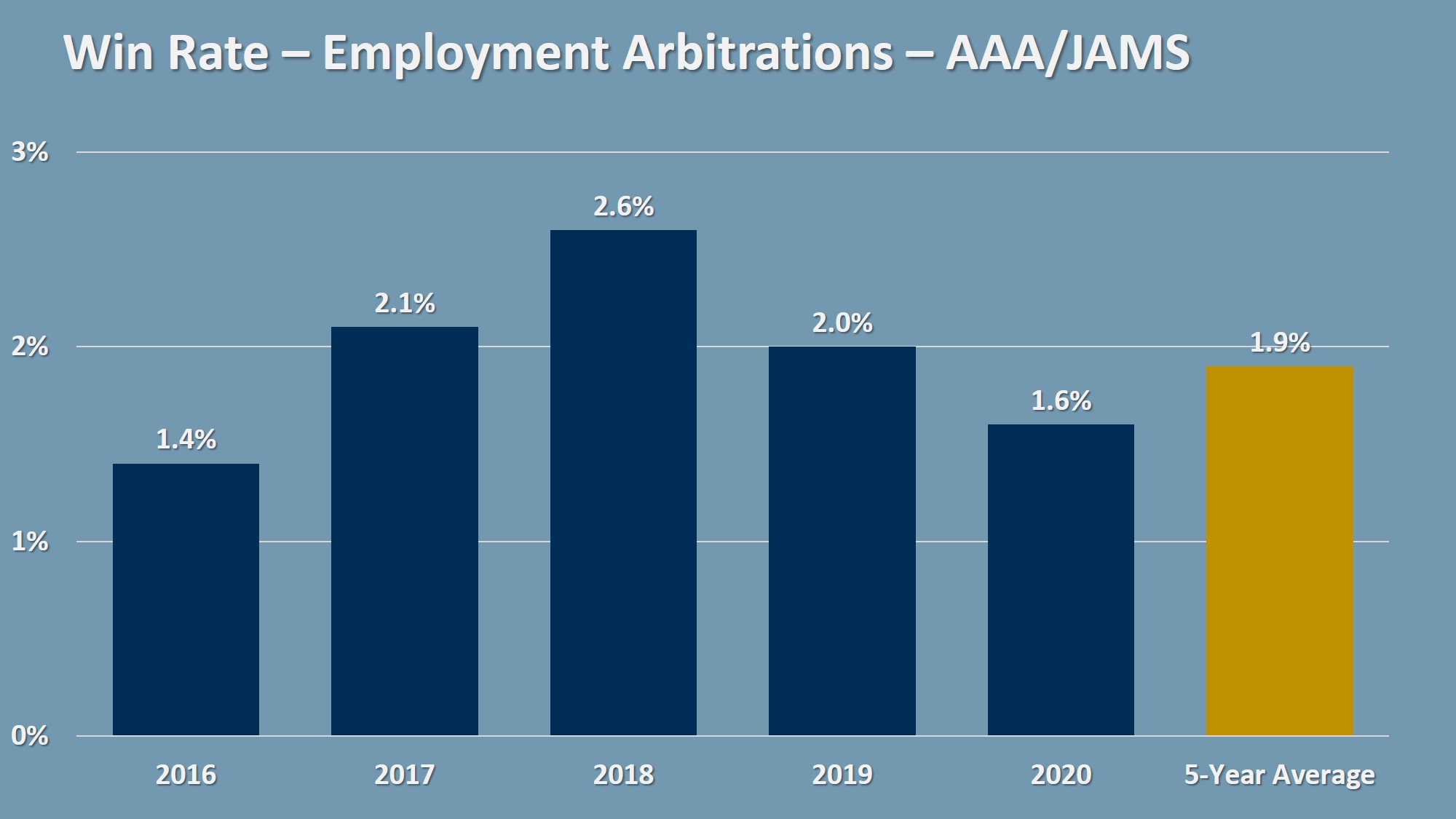 Over the last few years, many companies have dropped forced arbitration in limited circumstances. Facebook, Google, Lyft, Microsoft, Uber, and Wells Fargo have all yielded to pressure to drop forced arbitration for sexual harassment claims.4

Family Dollar’s ascent to #2 corporate defendant in forced arbitration over the last five years came courtesy of over 1,000 employment claims settled on the same day in mid-June 2020. Though each was an individual claim, together they effectively formed a “group action,” something corporations thought they had managed to eliminate with forced arbitration.

One of the driving factors for corporations’ inclusion of forced arbitration clauses in contracts is to prevent harmed individuals from banding together and going to court as a class action. However, corporations are now seeing a rise in large numbers of arbitration claims filed by individuals on the same day, in what is effectively a “group action.”

Corporations that thought forced arbitration was an effective way to eliminate claims have not appreciated consumers and employees turning the tables against them, putting corporations in the ironic position of trying to undermine the very system they themselves set up. Amazon, American Express, Anderson Financial, AT&T, Bechtel, Chime, Green Dot, and Zenimax Media all faced more than 10, and sometimes over 100, claims in a single day in an apparent sign of group actions.

Eliminating group actions—such as class actions—is a major selling point for corporations using forced arbitration. For decades, the class action lawsuit has proved a powerful tool for holding corporations accountable.6 Class actions can bring together claims that allege widespread misconduct—such as fraud, breach of contract, price-fixing—but which are financially unfeasible to pursue on an individual basis. The possibility of facing a class action also deters such misconduct in the first place, whereas forced arbitration not only eliminates the majority of claims but also gives corporations carte blanche to take advantage of consumers.

To make such poison pills more palatable to consumers, the corporate lawyers who pioneered forced arbitration had corporations pick up most of the fees charged by arbitration providers. However, when claims are filed in large numbers, it can have the effect of exposing corporate defendants to significant arbitration fees. That’s how the delivery service Postmates found itself ironically opposing its own forced arbitration provision when more than 10,000 of its couriers filed arbitration demands regarding Postmates’ improperly classifying them as contractors, rather than employees, to avoid providing employment benefits.7

Similarly, DoorDash tried, and failed, to get out of its own forced arbitration agreement after more than 5,000 of its couriers filed to arbitrate wage-and-hour claims in late 2019.8 The claims ironically forced DoorDash to pay roughly $12 million in non-refundable fees to its arbitration provider, AAA. DoorDash went to court seeking to use a class action—the very recourse it had tried to eliminate for its workers—to settle the claims. U.S. District Judge William Alsup was not impressed, “Faced with having to actually honor its side of the bargain, (DoorDash) now blanches at the cost of the filing fees it agreed to pay in the arbitration clause. No doubt, DoorDash never expected that so many would actually seek arbitration.” Judge Alsup concluded, “This hypocrisy will not be blessed.”9

Faced with the prospect that forced arbitration might not be the corporate Get Out of Jail card it was designed to be, Amazon dropped forced arbitration requirements as part of its “conditions of use.” The company had been hit with roughly 75,000 claims alleging that its Alexa-equipped devices were recording customers without their consent. Since each claim involved upwards of $2,900 in fees just to start the arbitration proceedings, Amazon found itself potentially on the hook for tens of millions of dollars before a claim was even heard.10

What’s more, the corporate defense lawyers who pioneered forced arbitration for consumers and employees have already begun thinking of ways to thwart group arbitration claims. In a recent podcast, Alan Kaplinsky and Mark Levin—attorneys with Ballard Spahr who were instrumental in designing forced arbitration provisions and getting corporations to embrace them—spoke about their next steps in weaponizing forced arbitration, including:13

After being burned by forced arbitration, DoorDash took the latter option, dropping AAA and working with a new arbitration provider to create a whole new set of hoops for its contractors to jump through. Its new arbitration agreement directs claimants to the International Institute for Conflict Prevention and Resolution (CPR), which allows only 10 arbitration claims at once when more than 30 are filed, and mandates 90-day mediation sessions that would have the effect of delaying claims for years.14

Unlike courts, arbitration providers do not reveal data on the number of cases filed, only on cases closed, so the full impact of the pandemic on consumers and employees remains to be seen. But with consumer success at historic lows, it is already clear that forced arbitration remains as unfair as ever.

Copyright © 2021 American Association for Justice®. Reproduction of any kind is prohibited.